My purpose today is to talk about the characterization of certain properties of posets and dcpos by so-called forbidden substructures.  Although this is a pretty old theme, Xiaodong Jia really managed to make it shine in his PhD thesis [2].

Here is a trivial example of forbidden substructure.  Consider a poset X, and recall that X has the ascending chain condition (a.k.a., the ACC, see Proposition 9.7.6 in the book) if and only if every monotone sequence eventually stabilizes.  (Equivalently: there is no infinite strictly ascending sequence in X.)  Another way of saying that is that X has the ACC if and only if you cannot find a copy of the poset N of natural numbers inside X, or, in formal terms, there is no order-embedding of N into X.  Here N is the forbidden substructure.

There is a famous theorem, due to Kuratowski, which says that a graph is planar if and only if you cannot find any copy of K5 (the complete graph on 5 vertices) or of K3,3 (the complete bipartite graph on 3+3 vertices) in it.  I have deliberately removed some of the details (see the Wikipedia page), and in particular I have not said what “in it” means (see later), that is, what the substructure relation is.  (The substructure relation was the existence of an order-embedding in our example about the ACC.  Here, one requires a certain notion of graph embedding, and there are several.)

What I want to stress is that planarity is characterized by forbidden substructures again: here K5 and K3,3 are the substructures that are forbidden.

In graph theory, the celebrated Robertson-Seymour theorem states that any minor-closed (i.e., downwards-closed with respect to the so-called minor embedding relation) family F of graphs can be characterized by finitely many forbidden structures: there are finitely many graphs G1, …, Gn such that F is the class of graphs that do not contain any Gi as a minor.  In the case of planarity, n=2 and the two forbidden graphs are K5 and K3,3.  (That is Wagner’s theorem, not Kuratowski’s, in that case, if one wants to be precise.  I will not define what a minor is.)  But the theorem applies to any minor-closed family, and since the proof is not constructive, there are minor-closed families of graphs for which noone knows of any finite class of forbidden minors—although we know that they must exist.  That has weird implications in computer science: because testing for minors can be done in polynomial time, there are polynomial time algorithms to test any minor-closed property of graphs — however there are several cases where we do not know what these algorithms are: we have to check for minors, but which ones?

I have already mentioned how one could characterize posets with the ACC by N as a forbidden substructure.  Here “substructure of” means “poset that order-embeds into”.

There are many order-theoretic concepts that one can characterize similarly.  For example, a well-founded poset is one that has Z– as forbidden substructure (the set of negative integers, with the usual ordering).  A poset that is well-quasi-ordered is the same thing as a poset that is well-founded and has no infinite antichain (Proposition 9.7.17, item 4, in the book), hence is the same thing as a poset in which neither Z– nor N= order-embeds, where N= is the set of natural numbers with = as ordering. 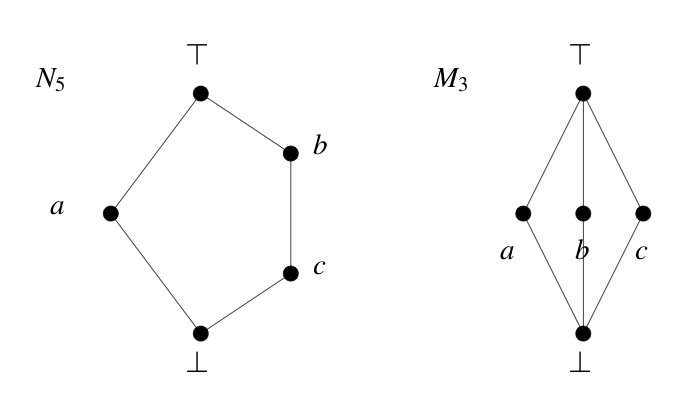 Proposition. L is not distributive if and only if N5 or M3 order-embeds in L.  (Correction, October 18th, 2022: lattice-embeds, not order-embeds: the embedding must also preserve both binary sups and binary infs.)

I do not know exactly who was the first to recognize the importance of forbidden structures in domain theory.  I had the impression that that should be Achim Jung, but I have found only a few traces of the idea in his PhD thesis [1], and I would have expected to see more of it there.

There is at least one explicit occurrence of the technique there.  In Proposition 4.22, page 98, Achim shows that a pointed continuous dcpo with property m is a continuous L-domain if and only if it does not contain a certain dcpo X⊥⊤ as a retract (see below for X⊥⊤; the picture is taken straight from Achim’s PhD thesis).

And there is the new feature: by a substructure A of B, we no longer mean that A order-embeds into B, rather that A is a retract of B.

There are several properties of (certain classes of) dcpos that one can characterize by forbidden retracts.  For example, improving upon the result we have just mentioned, Xi and Yang show [3] that a bicomplete dcpo (a poset X is bicomplete if and only if both X and Xop are dcpos) is a pointed L-domain if and only if it does not contain any of the following dcpos as retract: X⊥⊤, the two-element antichain {a, b}, and the three-element poset {a, b, ⊤} (with ⊤ above a and b, and a and b incomparable).

I have talked about meet-continuous dcpos last month.  Here is an example of a non-meet-continuous dcpo.  We take any well-founded chain C without a top element.  Call its least element 0.  We add a fresh element a on the side, that is, incomparable with every element of C, and a fresh element ⊤ above a and all elements of C.  Call M(C) the resulting dcpo.  This is the dcpo shown below, left.  Note that the chain C need not be just a copy of the natural numbers: we allow any ordinal here.

One of the nice results in Xiaodong Jia‘s PhD thesis is that those two objects M(C) and M(C)⊥ are exactly the structures that one has to forbid as a retract to define meet-continuous dcpos.

The idea of the proof is as follows.  If X contains M(C) or M(C)⊥ as a retract, then X cannot be meet-continuous, essentially by replaying the argument we have used for M(C).  In the converse direction, assume that X is not meet-continuous.  Then there is a directed family D and a point a such that a ≤ sup D but a is not in cl (↓D ∩ ↓a).

For now, imagine we have such an a and C.  That gives us a copy of M(C) order-embedded in X, together with sup C, which we label ⊤ (that need not be the top element of X, though, even if there is one).

If ↓C ∩ ↓a is empty, then M(C) occurs as a retract of X: the retraction maps every element below a to a, every element below some element c of C but not below a to the least such c (which is defined since C is well-founded), and all other elements to ⊤.  (Hmm… you also have to show that the inclusion of M(C) inside X is Scott-continuous.  That only works if C is limit-embedded in X, as X. Jia calls it.  Let me ignore this point.  This only adds minor technical difficulties to the whole construction.)

If ↓C ∩ ↓a is not empty, then M(C)⊥ is a retract of X.  This is a bit more complicated.  We pick b from ↓C ∩ ↓a, then there is a point c in C such that b≤c, and we take the least one.  Now we remove c and everything below it from C, and define a retraction by mapping every element of cl (↓C ∩ ↓a) to ⊥; all other elements are mapped to elements of M(C) exactly as in the case where ↓C ∩ ↓a is empty.

Fine, but we still have something to do!  We would like to show that if X is not meet-continuous, then there is a well-founded chain C such that a ≤ sup C but a is not in cl (↓C ∩ ↓a).  (In fact, a limit-embedded one.)

This is (half of) Theorem 3.3.8 in Xiaodong Jia’s PhD thesis, and the key is Iwamura’s Lemma.

Find a directed family D of smallest cardinality |D| (ordinals are well-founded) such that there is a point a such that a ≤ sup D but a is not in cl (↓D ∩ ↓a).  D cannot be finite, since then D would have a largest element d, which would be above a, and cl (↓D ∩ ↓a) would be equal to ↓d.  By Iwamura’s Lemma, we can then write D as the union of a chain of directed subsets Dα, indexed by ordinals α<|D|, such that:

Let C be the chain consisting of the points sup Dα, α<|D|.  (You can make it limit-embedded by adding the suprema in X of all subchains of C that have an upper bound in C, but I don’t want to make the exposition too complicated, hence I will ignore this point.)

That is just one step in X. Jia’s PhD thesis leading to the following wonderful result (Theorem 3.4.3 in [2]):

Any full Cartesian-closed subcategory of the category of dcpos whose objects are all quasi-continuous must in fact consist of continuous dcpos only.

(And therefore, of continuous L-domains, or of FS-domains, by Achim Jung’s celebrated classification result — at least in the pointed case.)

Here is the argument.  Assume that CCC contained a quasi-continuous, non-continuous dcpo X.  Since quasi-continuity+meet-continuity=continuity (a result by Hui Kou of which Weng Kin Ho had given an improved proof of, and which was the subject of last month’s post), X cannot be meet-continuous.

Now we know that X must contain M(C) nor M(C)⊥ as retract, for some well-founded chain C.   Let L=M(C) or M(C)⊥, depending on the case.  Xiaodong Jia shows that [L → L] is not locally compact  [2, Proposition 3.4.1].  This is tricky, but doable because of the restricted shape that L has.  He also shows that every core-compact dcpo in which every non-empty family has a supremum must be sober, hence locally compact [2, Theorem 2.5.8].  Due to the special form of L, that result applies to [L → L].  If it were core-compact, it would then be locally compact, which it is not.  Since [L → L] is a retract of [X → X] , and core-compactness is inherited by retracts, [X → X] cannot be core-compact either, and that contradicts the fact that it lives in a category of quasi-continuous dcpos.